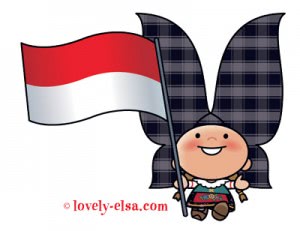 I believe it isn’t unnecessary to repeat how exotic Alsace can be: the language, the half-timbered houses, the traditional costumes, the bell towers topped with stork nests, the colourful vineyards, the village celebrations, the gastronomy… signs of a difference…

Do come and visit or rediscover the charms of a genuine country: the 2500-km long cycling tracks that make it the 1st cycling part of France; the 400 medieval castles among which 50 are listed as remarkable; the stunningly famous wine route, UNESCO listed; the 18,000-km long marked paths and tracks, the 200 museums; the 120 sites that constitute the route romane d’Alsace with its churches, its breathtakingly charming abbeys… etc…

The white Alsatian stork is a large wading bird that walks slowly. It is 1 to 2 m large, may weigh up to 4.5 kgs et live up to 25 years. Its size, its predatory instinct over pests and its peculiar nesting have always had an important impact over the Alsatian traditions and culture.

If a stork lands on your rooftop, it becomes your lucky charm, a sign of wealth and health, of family harmony, of protection against lightning, of blessing, etc. It is both a sacred bird and the symbol of our region.

Some forty years, around 1970, it had almost entirely vanished. But some associations took it upon themselves to reintroduce the bird with quite a success thanks to the creation of reintroduction centers. Numerous church and other public builiding rooftops have henceforth been topped with stork nests. So have a few individual houses!

40% or so of the Alsatian storks have been sedentary. The birds know they can feed on something even in winter.

Alsatian (Elsässisch or Elsässerditsch, “Alsatian German”) is an ensemble of German dialects (Alemannic and Frankish) that are traditionally spoken in Alsace.

It is second to French as a native language, and the logical extension of the French and German cultures, a sort of local salad bowl that was for a long time the birth tongue of most of the inhabitants.

Between 1870 and 1945, Alsace was forced to change nationalities on 4 occasions.

The postwar period was a huge blow for Alsatians. The language they speak was then considered an enemy tongue as it was associated to German, spoken by the Nazis. Speaking Alsatian was then therefore prohibited within schoolyards. For a time it became the language of the uneducated and the underprivileged.

Since then the people have realized that they could no longer do without a legacy that had provided them with a real treasure, that of a language with its inherent beauty, refinement, picturesqueness, humour and passion. It translates the inner Alsatian soul, something the tongues of Descartes or Goethe could not achieve. Alsatian has to this day been the most widely spoken regional tongue in France.

The Alsatian flag was born in the early Middle-Ages when the arms of cities and nobles were mainly coloured in red and white, as with the free imperial city of Strasburg.

The Alsatian soul has always been a symbol of peace, open-mindedness and generosity, and so has the Rot un Wiss (red and white). Our forefathers were made to change nationalities four times and give up on the free expression of their ways…

The Alsatian soul was also extremely bullied during the latest world war: Alsatians were deeply annoyed by their forced enlistment. They were condemned for that whereas most of them were once again victims whose hands were strongly tied.

In the postwar years, the “red and white” was unfairly treated and a substitute identity was created. Coats of arms were imagined and designed: the two départements have their own one and they were assembled to shape up an “Alsatian flag” symbolizing the two artificial départements of one region, Alsace…

Our flag is our legacy. It has lived through the centuries and generations, it bears the respect we owe our kin and a little though brave and peaceful people that suffered a great deal.

Pray our culture, our language, our ways and customs be preserved in our hearts and deepest memories.

In Alsace, everybody knows… that the history of gastronomy matches that of men! In the restaurants, the inns, the Winstubs and their traditional Stammtisch, togetherness and know-how are part of an art de vivre. Traditional bread bits are topped with local voluptuous rosehip preserves, damson jams or multi-flower honey. Whether a pastry cook, a butcher, a brewer, a baker, a cheesemaker, a grocer, a beekeeper, a chocolate maker, a wine-maker or a distiller, each and every craftsman does their utmost to preserve and share long-lived traditions that have since been passed on and improved from one generation to the next… Alsatian gastronomy meets all tastes for its cuisine makes a difference: it is extremely generous and exquisite whether the dish is salty or sweet. And the gourmets will undoubtedly find the appropriate wine to go with the food they eat…

Among the traditional recipes of Alsace you may find the Zewelkueche (an onion tart), the Roïgebradeldi (braised potatoes with onions and lard), the cervelat with vinaigrette, the Sparichle (asparaguses), the Lewerknepfle (liver quenelles), the typical Baeckeoffe, the Flammekueche (tarte flambée), the Bibeleskäs (fromage blanc), the sauerkraut with its Wädele (a small knuckle or back of ham), the Schiffala or Schiffele (smoked pork shoulder with a potato salad), the Fleischschnacka (rolled dough with pork and veal), the goose or duck foie gras, the game (hunting rights are particular in Alsace), all sausages and hams… Not to forget the numerous spirits and ales…

Alsace boasts the highest density of Michelin-starred gastronomic restaurants of the country.